Get me outta here!

I have a class full of Grade 1 students who love writing. If something exciting or interesting happens you can can guarantee that someone will say “CAN WE WRITE ABOUT IT?” or “CAN I MAKE A BOOK ABOUT THIS?”

It makes me so happy when I hear this kind of enthusiasm towards writing. One student is adamant that he is going to be an illustrator but the kind of illustrator that sometimes writes the words too. He has written his own series entitled “The Little Boy” and has been busy writing a letter to Todd Parr to ask him some pretty specific questions about his illustrations. “Illustrations are really important in a book, you know!” he claims almost daily.

His most recent book was called “How to Fix a Mestack”. He told the sweetest story about a character who had made a mess. He was feeling sad that he hadn’t made a very good choice but he wasn’t sure how to fix it. His Mom told him he could clean it up and so he did! At the end, the character says, “It’s okay to make mestacks!”

I couldn’t stop thinking about this book this afternoon because I made a pretty big “mestack”. I thought it would be a good idea to borrow some cross-country skis and go for a quick ski on campus. I got all geared up and hit the trails only to realise that the cross-country ski tracks had not been set. The trail had been groomed but the track wasn’t set. I told myself that it wasn’t a big deal because I could just skate ski.  Which sounds like a logical thing to do when you know how to skate ski. I, however have never skate skied in my life. That was my first “mestack.”

I started skate skiing only to realise that I was not very good at it. I kept at it. Until the groomed part of the trail ended. I was determined to go for a good ski, I didn’t want to turn back yet. I noticed there was a little track that someone had made by skiing through the fresh powder on the trail. We are talking powder up to almost your knees. I decided to follow it. This was my second “mestack”.

My skis kept sliding off the home made track and getting lost in the depths of the fresh powder. As a result I fell at least seven to ten times. I am sure I heard the deer and mountain lions laughing from the side lines.

I was faced with a mountain of snow blocking my way! There was no crawling through it, there was no going around it. There was only one option, turn around and ski the three quarters that you just completed.

Seven to ten more falls and I made it back in one snow covered piece.

Next time I am not making the same “mestack”, I am going snowshoeing instead! 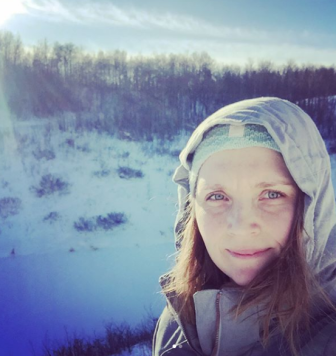 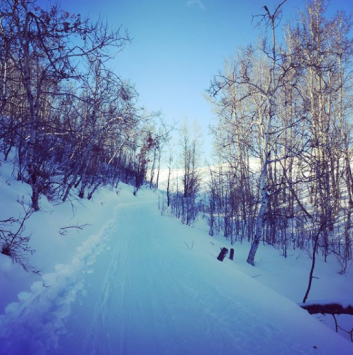